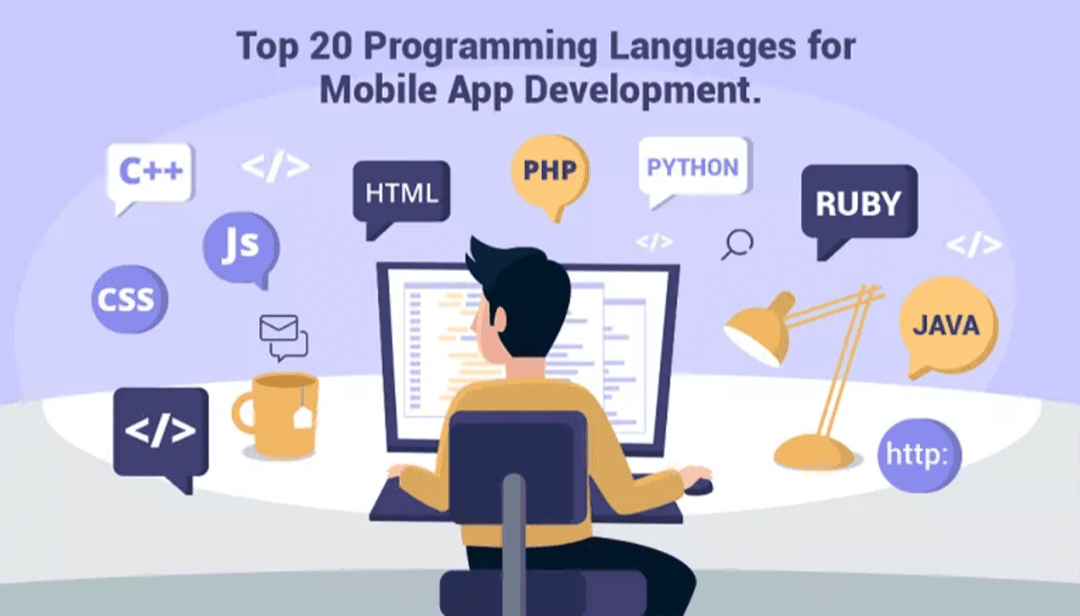 Java is one of the dominant programming languages in the world for the last two decades. It is favored by app developers as it's easy, flexible, and reduces the error during development. James Gosling provided the name Java in 1995. Java holds a large community to fix any technical glitches and makes it efficient and comfortable for the app developers.

PHP is one of the server-side scripting languages incorporated by Zend Technologies in 1995. PHP is used for different purposes, but the primary goal is to create websites. People who are well trained in PHP can develop different dynamic websites, web applications, and mobile apps. PHP7 is the recent version, and it recorded more significant improvement compared to the other PHP versions.

C++ is one of the mid-level programming languages that is used to develop low-level libraries and high-level applications. It's also an Object-Oriented language that uses concepts like abstraction, encapsulation, polymorphism, inheritance, and so on. C++ is one of the block-structured programming languages used in search engines, cloud-based applications, device drivers, and operating systems. The execution speed of C++ was high, and therefore many developers prefer C++ as their application development language.

C# can be used to create server applications, web services, mobile applications, and games easily. C# is also an object-oriented language, and therefore just like C++, they can use concepts like abstraction, encapsulation, polymorphism, inheritance, and so on. C# applications are low on power consumption and memory, which means it can compete directly with C++ or C.

Ruby is used for web development by web designers, and it also serves as the pathway for Ruby on Rails. When it comes to iOS and android app development, Ruby is the friendliest programming language available. It holds a robust technical community that solve any technical glitches. Twitter, Airbnb, and Bloomberg are top sites that use the Ruby on Rails on their online platforms.

Swift is used in iOS application development and is capable of executing both Cocoa and Cocoa Touch platforms. Swift needs fewer code lines to create an application and ensures scalable apps as they are capable of assisting other features. The performance and speed are higher in Swift applications, and the programmers prefer them for their stability and functionality.

The JQuery team developed JQuery in 2007, and the primary goal was to deal with client-side HTML scripting. JQuery has an excellent sector engine named Sizzle, which acts better at manipulation and traversal. Personalized UI and dynamic libraries are the two main reasons why programmers choose JQuery.

Boo is a free programming language incorporated by Rodrigo B. De Oliveira in 2003. Boo is an all-rounder that is used for general application development. It works best when used with Microsoft.NET and mono frameworks. Closures, list comprehension, and first-class functions are its unique features.

QML (Qt Modeling Language) is a mobile application programming language developed by the QT project in 2009, and it's similar to CSS and JSON. Most of the programmers do not prefer QML as the app that is created with QML does not work without a QT quick compiler, which is not available in any of the QML versions except the commercial ones.

Python is one of the vast application development languages most preferred by everyone, including business enterprises, individual users, and more. It's easy to learn and developer-friendly. Python is freely available as it's an open-source programming portable language, and it's capable of running on a different operating system like Mac OS, Linux, Windows, and more.

With the help of JavaScript and Build Fire SDK, Buildfire.js develop robust applications efficiently. Most businesses make use of Buildfire as they easily discard the developer's requirements to build an app from scratch.

Brendan Eich developed JavaScript 23 years ago at Netscape Communications. JS (JavaScript) is a mostly used technology across the globe, along with HTML and CSS. You can create interactive web pages, and most of the significant websites make use of JavaScript.

KOTLIN was designed by open source contributors and JetBrains in 2011. The main features of KOTLIN include easily understandable, compatibility with JAVA, compactness, and conciseness.

Tom Love and Brad Cox in 1985 developed Objective-C. The programmer needs to write long lines of code, and therefore the application development is higher. Apple uses this programming language for the development of MAC OS apps and iOS apps.

Structured Query Language was developed by Raymond F. Boyce and Donald D. Chamberlin in 1974. It's used mainly to retrieve database data reliably and quickly. The SQL database standards are high and therefore discard the requirement of heavy coding.

MIT Media Lab Lifelong Kindergarten Group developed scratch in 2002 to enable programmers to showcase storytelling, animations, and games. All age group users can use and learn it quickly.

The programming language was developed in 1970 by Guy L. Steele and Gerald Jay Sussman. It comes with functional and imperative programming capabilities.

Action Script was developed in 1998 by Gary Grossman for creating software and websites. It is also used to develop mobile applications.